Alexis Carrel has been called a Nazi-sympathizer, the father of tissue culture

Alexis Carrel has been called a Nazi-sympathizer, the father of tissue culture 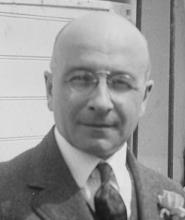 Alexis Carrel has been called many things: a Nazi-sympathizer, a quack, the greatest scientist alive.  The French scientist was a Nobel Prize winner in Physiology or Medicine, but also likely falsified much of his sensationalized “chicken heart” research for many years.  Whether he was a brilliant man or a crackpot, in one way or another Carrel set the exclamatory tone used by the press and the general public regarding tissue culture experiments, and other science experiments, for decades to come.

Carrel was born in 1873 in Sainte-Foy-les-Lyon in France.  He earned two baccalaureate degrees in letters and science before beginning his medical studies at the University of Lyons in 1891. As an apprentice in Leo Testut’s, a famous anatomist, laboratory, Carrel showed promise in dissection and surgery.

Carrel’s earliest work involved blood vessel sutures. During the time Carrel was working, surgeons did not know how to properly repair blood vessels. Most famously, in 1894, the president of France bled to death after being wounded by an assassin.  Carrel taught himself to sew with a small needle and silk thread on a piece of paper.  He then used a trial-and-error method to minimize the risk of infection. His strides in this arena were outstanding.

It was then that Carrel started to become a sort of separatist with the rest of the medical community.  He wrote an article about a miracle he witnessed at a Roman Catholic shrine, saying that there were miracles in medicine that could not be explained by science alone.

Moving to the United States, Carrel gained confidence that he could perform blood transfusion and organ transplantation based on his success with suturing blood vessels.  He performed successful kidney transplants on dogs and in 1906, was invited to work for the Rockefeller Institute for Medical Research in New York City, a facility created solely for medical research.

For his continued advancement in the field of vessel suture and blood transfusions, Carrel was awarded the Nobel Prize in 1912.

Because of his success with tissue culturing, Carrel began to think that he might be able to keep human tissue and organs alive artificially in a laboratory, hoping that eventually these might be used as replacement for diseased or damaged human organs.  One such experiment was his so-called “chicken heart” experiment.  Carrel took tissue from a chicken embryo’s heart and kept it alive for thirty-four years.

Newspapers grabbed onto and sensationalized the story, saying that the chicken’s heart was growing and throbbing.  The World Telegram newspaper wrote about the chicken heart’s birthday each year.

He designed a sterilizing glass pump in the 1930’s that could be used for growing organs kept in the lab. He and the aviator Charles A. Lindbergh appeared on the cover of TIME magazine in 1935 holding their so-called mechanical heart.

In 1941, Carrel returned home to France to direct the Foundation for the Study of Human Problems in Paris. In 1944, after the Allies reoccupied France and restored the French government, Carrel was suspended and accused of collaborating with the Germans.

Ironically, before trial, Carrel had a heart attack and died of heart failure. So, Carrel, with his radical views and unconventional research, was never able to clear his name one way or the other.


Robot Boat to Sail the Seas of Titan

We Support
Climate Activism
Click to reach the League of Conservation Voters.
Conversation Processing Intelligence™ beta website!
Click here to visit the hub of the Klat Network.
This site is part of the Klat network of blogs, forums, and communities.

Spiders say, “No means no!”

Evidence of oldest Americans uncovered from a prehistoric toilet

Spoiled by the Weather Channel